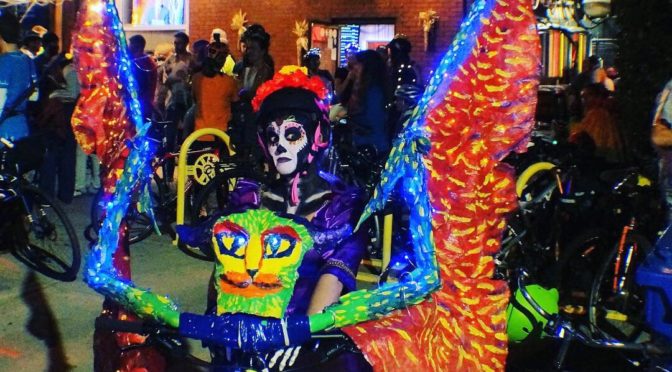 I don’t think that I did that spirit animal justice, by any means, but overall the costume was a hit and was fun!!!

Check out this  VIDEO that my friend posted on Instagram of my riding on Pepita!

If I was going to ride Pepita, the spirit animal of Mama Ismelda, then it only made sense that I would dress up as Imelda. WHICH required a whole new style of make up for me…

BUT lets start with the BIKE costume first:

I was lucky enough to already have the “skeleton” of the bike costume as I wanted to ride a DRAGON in a previous Halloween so I had already made the wings.

For the basic jist of how I made the wings, check out my AWESOME BIKE COSTUME IDEAS post!

The wings took about 16 hours to make so I’m glad I didn’t have to reinvent that wheel AND was so happy to be able to reuse them!

Now all I had to do was paint them.

IMPORTANT TO NOTE:  See how ugly it looks all along?  but the finished product looks great!  I’m not an artist, and one doesn’t have to be, to make a decent costume!!!! It’s always nice to have a helper , of course 🙂  THANKS  Sirius Black! Here are the base coats Then added some green definition (I just tried to use the picture at the top of this blog as a guide). Nothing special here…..but all that matters is bright colors! My point with all these pix? it can look like a mess and no talent required, and the end result still looks pretty good! ONCE I was done painting, I used my hot glue gun to add on THESE AWESOME LIGHTS!!!!!!  They REALLY made the costume!!!! oh boy- –THEN I had to make the head….so I decided that, for the first time since grade school, I’d use paper mache!!! This stuff is SOOOO easy~ just add water and mold!

I didn’t think blowing up a balloon would make the head as big as I wanted it to be, so I bought wire mesh instead , although, it turns out that if I got a big enough balloon, that probably would’ve been bigger and better and easier. 🙁

So I’m not sure that I recommend the wire mesh, and would probably recommend an old school big balloon!

Although I was an inexperienced NOOB (as quite obviously illustrated below)  I REALLY, REALLY enjoyed playing with the paper mache and molding Pepita’s weird head with my hands.  I can’t wait for my next paper mache project! Once poor disfigured Pepita had fully dried (24 hours) it was time to paint him.  CLEARLY I’m no artist….but this is how he turned out, and he served his purpose 😉 by the way, these wings MOVE too!!!!!   See my other blog (AWESOME BIKE COSTUME IDEAS ) for a link to how to make MOVING wings for your bike! And, of course, SAFETY first, so i HAD to wear a helmet….BUT I couldn’t just wear my boring old helmet so I just dressed this one up with this Dia de los Metros Light up Red Flower Crown Headband!

The cool thing is that it LIGHTS UP! Finally, I threw on my dress and did my make-up.

For the make-up I used Mehron Black, Mehron White, then for the embellishments  I could use either Mehon Purple, Mehron Pink, Mehron Blue  OR what I used, Face Gems …or you could try these super cool Temporary Face Tattoos but I do not know how well they do on top of the make-up. Then, once we got to Crank Arm, I “assembled” the costume by duct taping the wings to the handlebars with blue duct tape, and VIOLA! It was a super fun costume, and night!

Let me know if you try it or something like it!!!