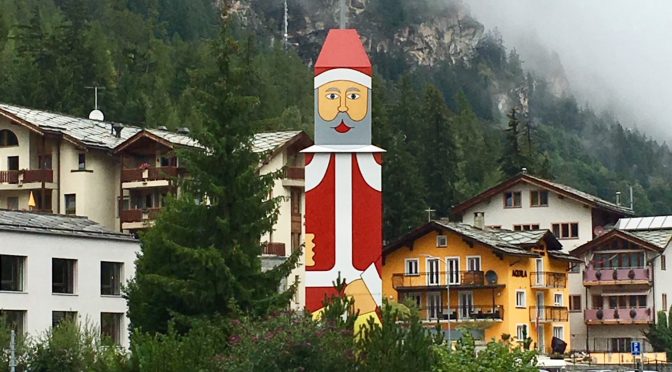 On August 6, 2017, we began a 6 day mountain bike trip with Alps Mountain Bike Guide Company starting in the amazing, adorable, adventure wonderland of Chamonix, France and ending in Zermatt Switzerland.  The trip was tough and included lots of steep climbing and hike-a-bikes and super technical descents, but it was super fun.  The weather not always kind or  forgiving, but the scenery, food and little towns that we would have never visited otherwise were awesome! Apologies as this post is not full of bike porn pics, but the weather was so nasty-There will a link to some beautiful and gnarly GoPro footage a couple of paragraphs below as soon as Dave uploads. My ankle was still swollen, but felt much better, but I still wanted to bail on this day so badly…but I didn’t!!!

Since the weather was so bad, we were dropped off on a peak in order to avoid a climb in the cold rain.  There were two restaurants there.  I went into one and it had amazing decor and ambiance.  I think a pic of the bathroom in this place was practically the only pic I took unfortunately, because we were in a rush to get started while the rain was still super light. I wish I would’ve taken more pix but we were so rushed all the time it felt like…I mean, nobody wanted to wait in the cold rain, so I get it…

The riding was wet and cold.  even the easy downhill sucked for me because I got so much mud in my face, and dripping down into my eyes…not even my glasses helped.

It took us 2 hours to cover ~5.6 hours before we were finally picked up by the shuttle van and  were taken to St. Niklaus to our B&B for lunch.  Since the rain cleared up, Dave and Toumas and one of the guides went on a little ride after lunch while a couple of us toured St. Niklaus in search of an ATM and newspaper to help dry our shoes. Dave has some beautiful Go Pro footage from this, which i’ll insert as soon as it’s up!!! PRO TIP: When I later told my chiropractor, (who was also a mountaineer who had spent most of his life from birth in Geneva),  how unkind the weather was to us on this trip,  he said that the trick was to ALWAYS PLAN TO GO TO THE SWISS ALPS DURING THE FULL MOON.  He said that the weather was always clear during that time frame.  Man, I wish I had consulted in him BEFORE we planned the trip!!!!

No pix riding, but at least i got some pix from St Niklaus, below: